Older ginseng plants come up a few days to a week earlier than young seedlings. For my location, White Mountains of northern New Hampshire, most plants are up by the 25th of May. At this time, apples and cherries have bloomed, many of the spring woodland wildflowers have gone by, leaves on the maples are approaching full size, but they still have that light green color of early season.

Meanwhile, life stirs in the ginseng root and it sends up, from a growth bud that formed the previous summer on the root, a fully formed plant -- leaves, stems, and flower head -- that is folded in on itself and curled up. The emergence and subsequent unfolding that is depicted in these photos took about four days. It was probably a little slower than normal because it took place in a spring that was cold and wet. 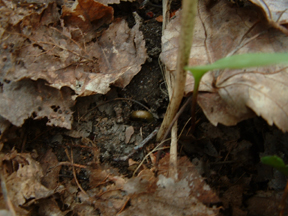 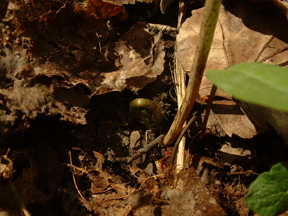 Above, you can see two dry stems from previous years. One is fallen over, the other is still standing. 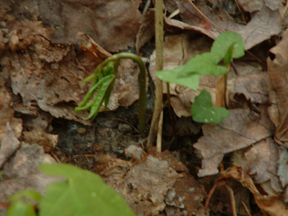 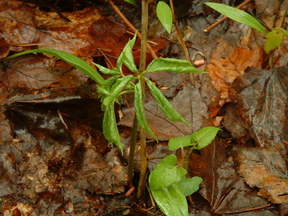 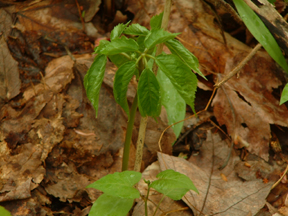 Sometimes ginseng decides it doesn't want to come up one season. This particular individual was given to me as a root by a fellow who sold me seeds for a number of years. He had the reverse of my situation. His ginseng grew too fast and it produced long straight roots that were unmarketable. So he gave me a root to plant. I checked on it diligently the following year after I planted it. Nothing came up. I was afraid maybe I had killed the plant, but it finally came up the second year and it has emerged yearly thereafter. The first time it came up it developed into a huge plant -- knee high. In subsequent years it was significantly smaller. This year it is about 8 inches to the prong.

Here are more pictures of an emerging American ginseng plant. 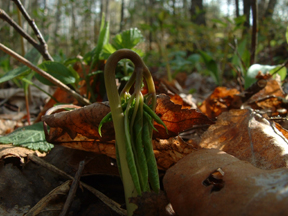 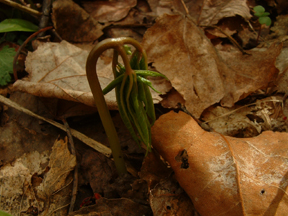 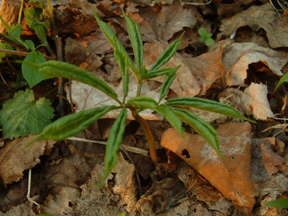 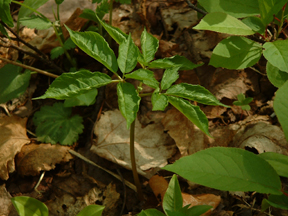 We have 300 guests and no members online